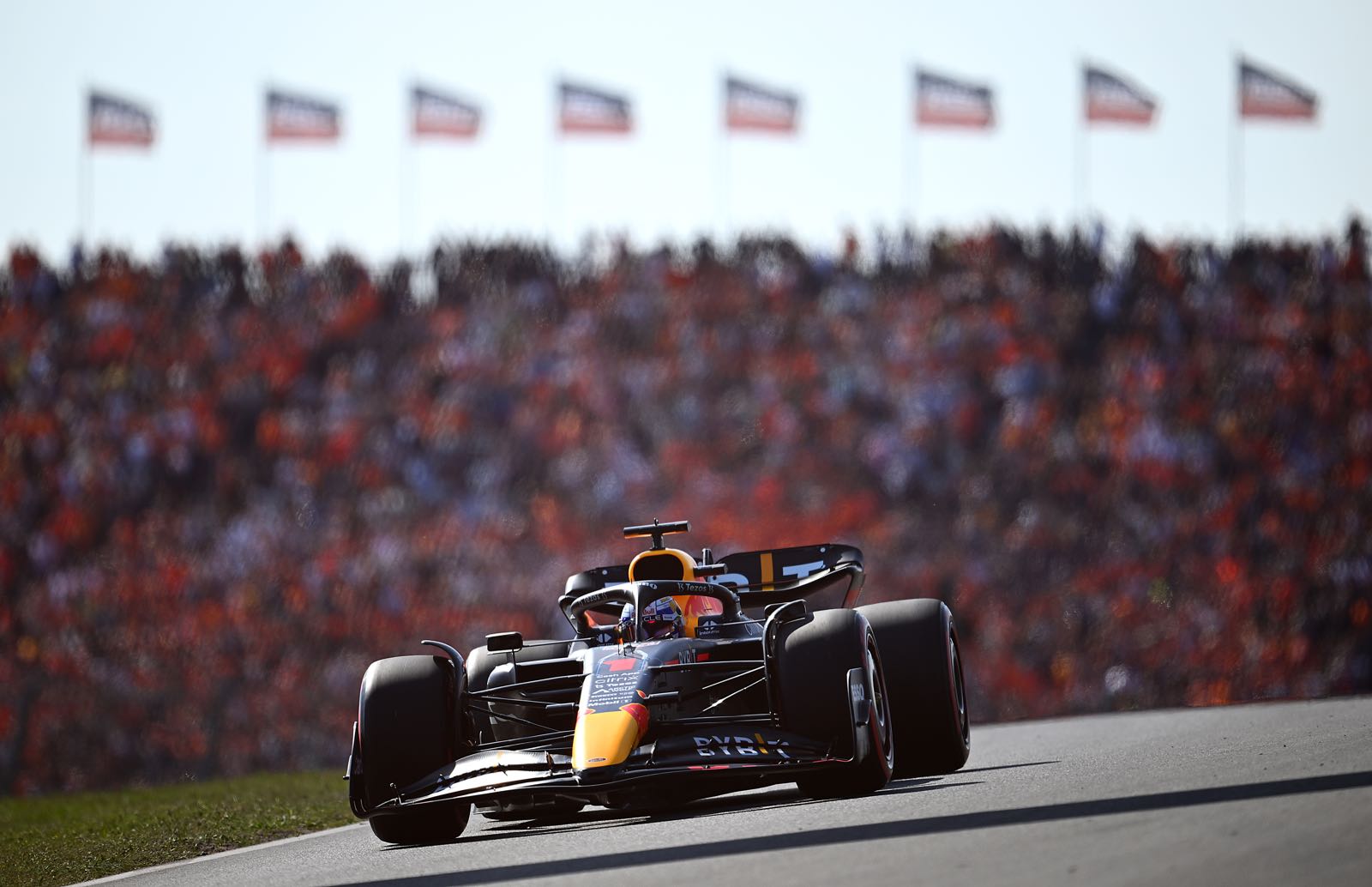 Max Verstappen won the Dutch Grand Prix in his Red Bull, 4.071 seconds ahead of George Russell in the Mercedes GP in second place, and Charles Leclerc in the Ferrari taking third place, 10.929 seconds behind the winner.

The win is the tenth victory of the season for Verstappen, fourth-in-a-row, and 30th of his career. Verstappen has extend his lead in the Drivers’ Championship to 310 points, 109 points over second place, which is shared by Leclerc and Perez at 201 points. Red Bull now leads the Constructors’ Championship by 135 points over Ferrari in second.

Lewis Hamilton (13.016s) in the second Mercedes was fourth, followed by Sergio Perez (18.168s) in the second Red Bull was fifth, Fernando Alonso (18.754s) in the Alpine-Renault was sixth, Lando Norris (19.306s) in the McLaren-Mercedes was seventh, Carlos Sainz (20.916s), with a 5-second penalty in the Ferrari was eighth, Esteban Ocon (21.117s) in the second Alpine was ninth, and Lance Stroll (22.459s) in the Aston Martin-Mercedes took the final point in tenth place.

Before the start, clouds started to roll in and it was warm and muggy, with a 20% chance of rain.

Verstappen is on pole for his home race with Leclerc alongside on the front row, Sainz and Hamilton are on row 2, Perez and Russell on row 3, Norris and Schumacher on row 4 and Tsunoda and Stroll rounding out the top ten on the grid.

The Red Bulls and Ferraris starting of soft tyres, Hamilton and Russell starting on medium tyres.

At the appointed time the field left the grid for the formation lap, the sea of orange in full force around the circuit, the drivers lined up, the lights went out and the race began with Verstappen leading Hamilton and Sainz nearly touch in the first corner. Norris passes Russell for sixth.

On lap 2 Magnesen goes off at turn 2 and kisses the wall, but continues.

Russell is able to get back past Norris and runs in sixth.

On lap 3 Verstappen has a 1.5 second lead on Leclerc, Sainz, Hamilton, Perez, Russell, Norris, Stroll, Ocon and Schumacher in tenth.

On lap 5 Hamilton has closed to DRS range with Sainz.

On lap 14 Tsunoda pits for medium. Schumacher has a

On lap 17 Stroll pits along with Botas.

On lap 19 leader Verstapppen pits switching to medium tyres and he rejoins third behind Hamilton and Russell.

Ocon pits as well for hard tyres and rejoins in 11th.

The two Mercedes are the only drivers yet to pit.

On lap 27 Verstappen passes Russell in the DRS for second place.

Ricciardo pits for his second stop for hard tyres.

On lap 29 Hamilton pits from the lead and switches to hard tyres and rejoins in fifth - Verstappen resumes back in the lead.

Russell pits from second place for hard tyres and rejoins in fifth.

Hamilton has closed within DRS of Perez.

Hamilton makes an attempt at passing Perez but the Mexican keeps the position,

The next lap Hamilton passes Perez for third place into the first corner.

Hamilton is held up by the lapped Vettel, and Perez try to get back around, but Hamilton keeps the position.

Russell passes Perez for fourth, the two Mercedes running very fast at this point of the race.

Red Bull asks Verstappen what tyres he thinks he wants to take, he can either take soft or hard.

Perez pits from fifth for hard tyres and resumes in seventh.

Sainz pits for hard tyres and rejoins in ninth.

On lap 45 Tsunda pulls to the side of the track, and teams are anticipating a virtual safety car. Tsunoda thought his tires were not attached correctly in his pitstop. AlphaTauri tells him that it is all correct, and he starts running again and pits.

Leclerc pits for hard tyres and rejoins in fourth.

Tsunoda rejoins, but is running slow, and the team reports the is a problem with the diff and he stops on track again.

The virtual safety car is out, and leader Verstappen pits for hard tyres, Hamilton and Russell both bit for medium tyres.

At lap 49 the race resumes with Verstappen leading Hamilton and Russell.

On lap 53 Alonso makes an attempt to pass Norris for eighth, but can’t quite take it.

On lap 55 Bottas stops on the side of the track with an engine failure. Sainz was passing Ocon at the time. Sainz asks the team, “do I let him by?”

The safety car is out.

The cars pass though the pits to avoid the cleanup of Bottas.

Russell pits and changes to soft tyres. Sainz has a potential unsafe release ahead of Alonso.

Sainz is given a 5-seconds penalty for an unsafe release.

On the track the lapped cars are able to come around.

At lap 60 the safety car comes in and the race resumes with Hamilton leading Verstappen.

Verstappen passes Hamilton into the first corner for the lead, followed by Russell, Leclerc, Sainz, Perez Alonso, Norris, Ocon and Stroll in tenth.

On lap 64 Russell passes Hamilton in the DRS to take second place. Hamilton complains to the team that under the safety car that they messed up the strategy.

On lap 65 Leclerc is pressuring Hamilton for third.

On lap 66 Leclerc passes Hamilton into the first corner to take third place. Hamilton on the medium tyres is under pressure from all the soft runners.

Norris is pressuring Alonso for seventh.

Perez tries to pass Sainz on the outside, and runs off the exit of the corner and cannot get past.

At the finish Verstappen takes the flag ahead of Russell and Leclerc.