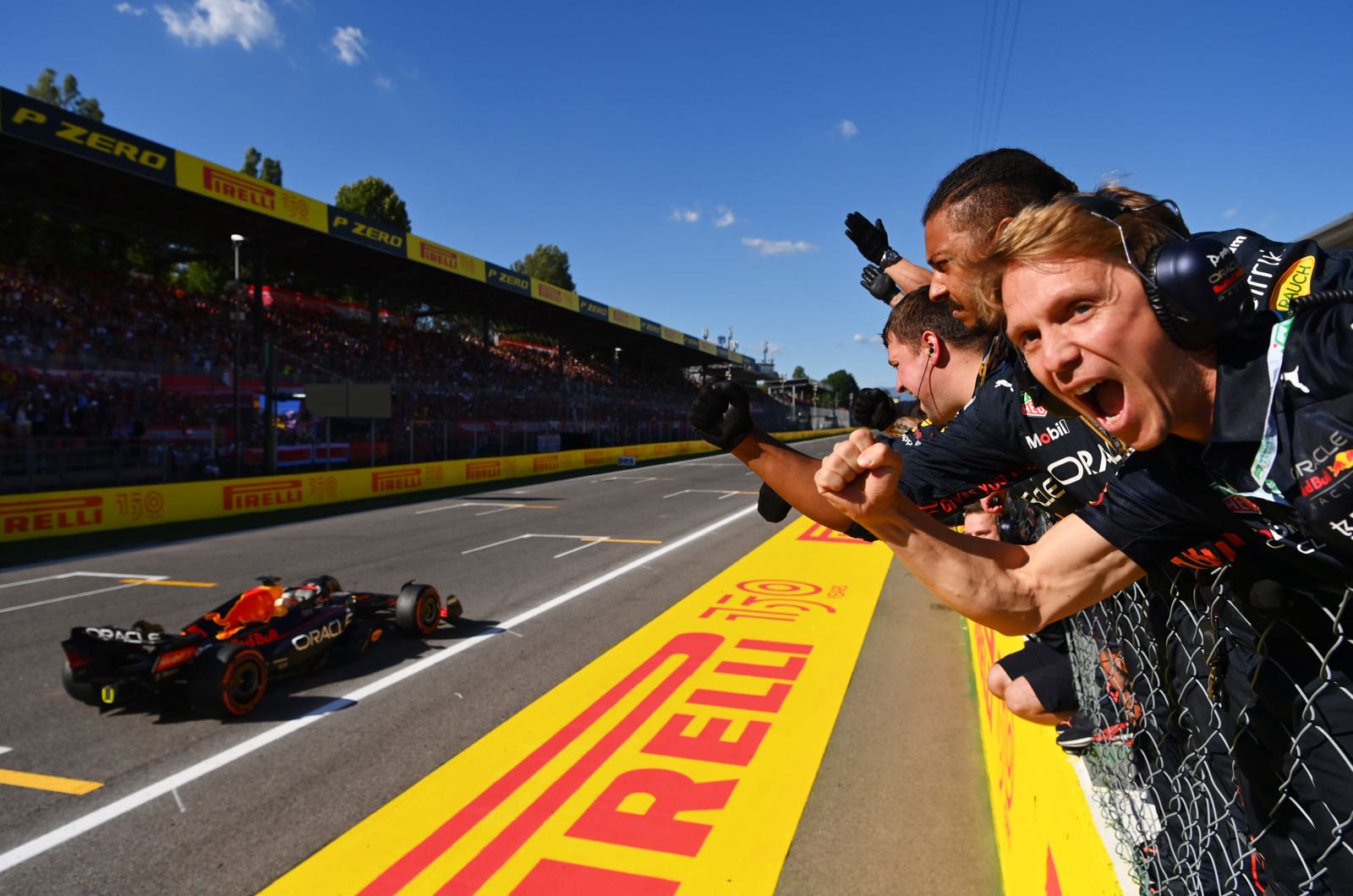 Behind the Safety Car, Max Verstappen won the Italian Grand Prix in his Red Bull.

Charles Leclerc (2.446s) in the Ferrari finished in second place, George Russell (3.405s) in the Mercedes GP was third.

Before the start the field was scrambled after qualifying from various grid penalties with Leclerc and Russell starting on the front row, Norris and Ricciardo on row two, Gasly and Alonso on row three, Verstappen and De Vries on row four, and Zhou and Latifi rounding out the top ten. Perez starts in 13th, Sainz in 18th and Hamilton in 19th.

Leclerc, Russell, Verstappen, De Vries and Ocon starting on soft tyres, the rest of the drivers starting on medium Tyrees.

At the appointed time the field made the formation lap and lined on the grid, the lights went out and the race began with Leclerc in lead with Russell second, Ricciardo, Gasly and Verstappen following, Norris falling back to sixth.

On the first lap Verstappen gets past Gasly for fourth, then on the start of lap 2, passes Ricciardo for third. Perez is in 15th, Hamilton 18th.

Leclerc leads Russell by 1.8 seconds, with Verstappen in third, 2.4 seconds behind Leclerc.

Verstappen is pressuring Russell and on lap 5 passes him into the first corner for second place.

On lap 8 Perez pits for hard tyres, but his car is smoking from the right front disc brake as he rejoins.

On lap 11 Sainz passes Norris for sixth place into the first corner.

On lap 12 Vettel pulls to the side of the track.

Sainz passes Gasly for fifth place. The Virtual Safety car is out, while Vettel’s car is cleared.

On lap 13 Leclerc pits for medium tyres and rejoins in third just ahead of Ricciardo, and the Virtual Safety car is over and the race resumes.

Gasly cuts the corner at the first corner.

Magnussen is handed a 5-second penalty, for leaving the track and gaining a position.

On lap 18 Norris passes Alonso into the first corner for seventh place.

Gasly pits and takes on hard tyres and rejoins 16th.

De Vries is getting flagged for track limits.

On lap 20 Ricciardo, De Vries and Ocon all pit

Gasly is closing on Ricciardo in 12th.

Ferrari tells Leclerc that they are thinking of running ‘plan C’.

On lap 24 Russell pits from second place for hard tyres and rejoins in fourth behind Sainz.

Hamilton is closing on Alonso in sixth.

On lap 25 Verstappen pits from the lead and changes to medium tyres and rejoins in second place, Leclerc retakes the lead.

On lap 31 Sainz pits from third switching to soft tyres and rejoins eighth.

On lap 32 Alonso pits and retires with a mechanical issue.

On lap 34 Leclerc pits from the lead and changes to soft tyres and rejoins in second place, 19.5 seconds behind Verstappen.

Hamilton pits for his first stop for soft tyres and rejoins 12th.

Schumacher makes his first stop as well for soft tyres and rejoins 17th.

On lap 36 Norris pits from fourth and with a slow stop changes to medium tyres and rejoins loosing out and is in ninth.

Hamilton gets up to seventh.

On lap 43 Perez pits from fifth place, changes to soft tyres and rejoins in seventh place.

Sainz is lapping quicker that Russell ahead of him in third, but trails by 7 seconds with laps running out.

On lap 47 Ricciardo pulls to the side of the track with an engine failure. The safety car comes out.

Russell and Sainz pit. Norris pits as well. The next lap Verstappen and Leclerc both pit.

At lap 50 Ricciardo’s car has yet to be removed as laps are running out. Will we be about to restart?

The laps run out behind the Safety Car and Verstappen crosses the line and wins overs Leclerc and Russell.